When I was young my mum had hung a mirror beside a window. A pair of House Sparrow used to come daily to inquire the obscurity of that mirror by pecking it, sometimes furiously, and at times lazily. It was a strange object to them that they could play with, without getting bored. And, it was not just the mirror that intrigued them so much, there was a treat to allure them too. We had come to love those birds so dearly that we used to sprinkle rice grains around the window sill every day. They used to come every morning, and if windows were latched they demanded us to open it by pecking it as if knocking a door to be opened with familiar authority, a thing we do so often when we return home. After some time, I don’t remember after how long, when a violent storm hit our hometown, that mirror fell and cracked. The birds still came often to pay us a visit, playing around ceiling fan or just flying around the room chirping in and out till evening (freaking my eldest sister with their sudden entrance and departure, much to our amusement) as if trying to tell us that they loved to be around us regardless of that worthless mirror.
Their memories are still fresh in my mind. Whenever I close my eyes to recall those birds I feel warm and love flowing through me. They remind me of home, of comfort. If you find a house echoing with chirps of House Sparrows and find their nest in one of its nooks or crannies, that place can suitably be called a home filled with love, warmth, comfort, peace and security because even after being not-so-afraid of humans sparrows do not trust us easily enough to build nest in our house. They are gregarious birds alright and a family of house sparrows can create a great commotion to your great annoyance, but you will bear with them and love them all the same; because they also know how to be mellow and sweet and simply keep you company when you want silence and peace. But, they can’t help tweeting or chirruping once or twice because it is as if they can’t refrain from asking you of your well-being. Once you are aware of their presence around you, whether it’s a nest in one of the mango trees near your veranda or their nestling twittering on top of one of your cupboards, you start getting amused with their activities. Soon your curiosity gets better of you, and you try to know more about them; you try to befriend them by littering broken rice or chapatti crumbs to attract them and see them peck ‘n play that you can easily watch for hours and hours. Personally, as I have spent so much of free, lousy childhood time watching these birds, I have come to believe that House Sparrows are healer. They pass on their vibrant, warm energy to you with their mere presence that can heal your heart of unknown ailments. All you have got to do is to realise their presence and that is all it takes to be loved, to be filled with warmth and to be healed. 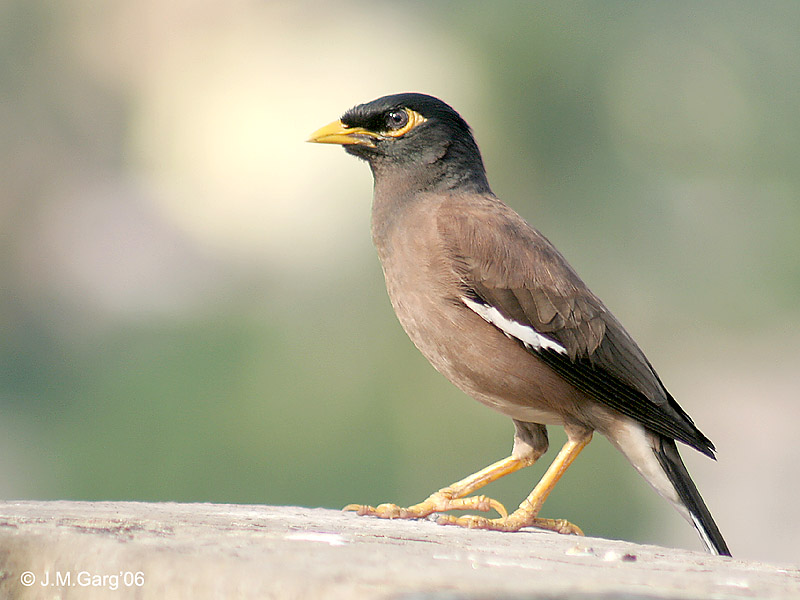 The month of June barely starts and two Bird-of-the-Month nestlings fall into my life.

My morning walks are action-packed in several ways but this was certainly not what I expected as I carried munchies for furry friends this morning. I was about to turn back home when I heard that unmistakable chi-chi-chi of a baby Myna. Nothing surprising since it is Myna month in the true sense of the term and baby mynas in different stages of growth are all around us. But the sound came from the ground level and it was the voice of a very young myna. That can be a little alarming for the bird’s safety, since it is more vulnerable to all sorts of dangers. I stepped back and followed the sound: two barely-feathered hatchlings, one behind the other. One was dead. The other was calling out.

Well, the first thing to do was to locate the nest. I craned my neck but for at least 20 feet up into the imposing silk cotton tree there was no sight of a hole or nest of any kind. There was an adult myna peeping through the branches, but it didn’t look too anxious and didn’t let out a single cheep. In fact, it soon moved away disinterested.

The little fledgling continued to cheep. The baby had to be rescued! Someone outside the building opposite was more than helpful when I requested for a piece of soft cloth to take the myna up in since I didn’t want to injure it inadvertently in a bare-hand snatch. He even offered to keep Chi (in Chinese, I’m told, that means, Life Force) till I could get her picked up, since I was quite far from home. As he bent over to pick up Chi, he gave me some good news. The other one was also alive! So, both Chi and Jiya (heart) were rescued.

In less than half an hour, they had been checked and cleaned of fleas and their wounds had been cleaned by the very kind veterinary surgeon but it was obvious they needed some mother-henning. The babies came home in a clean cardboard box lined with dry grass.

Emails and calls flew across the city and country regarding their diet chart that now includes mashed biscuits and mashed fruit. Feeding them by hand was not hygienic for the birds since they had to be cleaned of spills that may have attracted ants. So, now, they are being fed with a syringe. Just to rule out accidental choking from an inadvertent overdose, we fill very little each time, just enough for a mouthful. When you’re talking of a fledgling’s mouthful, it is really a tiny quantity.

The progress has been heartening from the first meal: Chi doesn’t know where she’s going but is busy practicing hopping out of the carton; Jiya, who was too weak to sit when we found her, is now sitting up and eating more heartily than Chi.

Is this the end of a happy story? Far from it; from two generations’ experience with nestlings, we know we are up against a challenge. And those things are precarious. It is just the beginning of a new chapter whose length we don’t know. We are counting the hours since they are so tiny and so vulnerable. Three of the four eyes are yet to open.

So far, so good! It’s time for the next feed…

Please wish them health and a long life!

Benita Sen is a journalist and children’s author.

I lived with my parents and three sisters in a place called Gyogon which was a few miles away from Yangon (Rangoon) in Myanmar (Burma). We lived in a beautiful teak wood house built on stilts with a lovely flower garden and a vegetable garden. A few mango trees, a tall tamarind tree, papaya and the most delicious ‘martaban’ banana plants grew in our garden.

We lived with nature. Snakes, scorpions, lizards fell on our shoulders causing utter chaos while we studied at night. During the monsoons, menacing leeches hung on to us. We must have loved birds because we were alert trying to save the sparrow nestlings when they fell from their nests. They were featherless creatures and helpless. My elder sister and I used to pick them up, wrap them in cotton wool and take them into the kitchen to keep them warm by the fire. They were fed with drops of sugar water and we hoped that they would survive but alas, these little ones would just slip away from this world.

After shedding our tears we arranged for their burial. Mud was dug up behind our Mali’s quarters and the little one would be laid to rest on leaves covered with mud and flower petals. The Mali cooperated with us in burying the sparrows.

Weeks later, we four children would decide to see the condition of the buried bird as we were told that they became dust. How disappointed we were when on digging up the buried ground, all we saw were red ants! This infuriated the Mali who threatened to report us to my father but of course, he was kind enough not to do so.

Sadly, the war with Japan started and leaving this beautiful house we fled to India in February 1942 to start life anew.

Years have gone by but memories do not fade and now as an octogenarian, I have started feeding sparrows, doves and bulbuls who sit on the trees in my little garden waiting to be fed. Sixteen sparrows come along with at least eight doves, grey in colour with yellow specks on their wings. They feed on bird seed and chapatti. The bulbuls feed on ripe banana although once in a while they enjoy other tit-bits. They drink water, bathe and fly away. Black and white magpie robins come for a bath and then fly off. These birds live in perfect harmony. I watch the fledglings being fed by their mother and also see on bully dove chase away the other doves but it never attacks the sparrows! Tiny honey-suckers who make the most noise, swing on garland-like flowers of a creeper sipping the nectar. With three pale honey-suckers come a dark blue one, a loner.

From early morning till 4 pm these beautiful birds are my companions and these harmless little friends keep the lady who helps me, busy replenishing their food dishes.

We have always had birds in and around our home but my thanks for this love of feeding the birds goes to my daughter Benita who loves animals and birds and feeds a variety of them.

I also thank Mr Mohammed Dilawar for making me a member of Nature Forever Society.

May God bless you all for looking after these innocent, helpless birds.